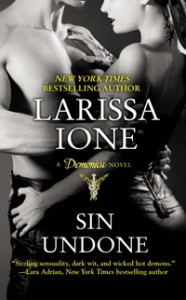 How I got this book: Won in a contest

HER TOUCH IS DEADLY

As the only female Seminus demon ever born, master assassin Sinead Donnelly is used to being treated like an outcast. She spent decades enslaved, and now vows she’ll die before she’ll relinquish her freedom again. Then Sin’s innate ability to kill her enemies goes awry: She creates a lethal new werewolf virus that sparks a firestorm of panic and violence.

HIS HUNGER CAN’T BE DENIED

Half-werewolf, half-vampire Conall Dearghul is charged with bringing in Sin to face punishment for the plague. And she’s no stranger: He’s bound to her by blood, and the one sexual encounter they shared has left him hungering for her raw sensuality. Worse, Sin is the underworld’s most wanted and Con soon learns he’s the only one who can help her . . . and that saving her life might mean sacrificing his own.

Wow, just wow. Larissa Ione scores again with another huge hit in her Demonica Series. Sin Undone, book 5, features Sin, the only female Seminus demon, and the ever so delicious Con, the were-vampire paramedic.

When we last left Sin and Con, the disease that Sin accidently created was wrecking havoc within the werewolf community, killing them left and right, with no hope for a cure. Con is beyond pissed at Sin, and doesn’t give her the chance to express remorse at what she has caused. When Con is assigned by the wolf council to bring her in, he is stuck trailing her around, and forced to save her life time and time again.

As Sin and Con race around the world trying to find a cure for her disease, her assassin’s and a mysterious man on horseback are chasing after them, trying their hardest to take her out. With the constant danger, and intense attraction to each other, they must battle more than just the outside forces to save the werewolf community from being wiped out.

Oh I loved loved loved this book. Sin and Con are such great characters, and together they totally rocked my world. I love that Sin holds secrets close to herself, and has a hard time letting other people into her life. But, I love that she still feels everything wholly and deeply. She is am amazing character, strong willed and yet tender at the same time. She is like an amazing alpha heroine that you can’t help but to love.

Likewise, Con was so great. Despite being amazingly delicious, he is ALL alpha male. I loved the fact that he was hesitant about his feelings towards Sin, and that as he unwrapped more and more of her secrets, he found himself falling more and more in love with her. Their volatile passion was smoking hot, and I was amazed at all the different ways they were caught having to save each other. It just rocked the passion up another level.

I was glad to see how Ione handled the disease that was killing the weres, and how it was all eventually resolved. It was done to perfection in my eyes. I was also super excited to see that some of our other favorite UGH characters got a lot of print time. I have absolutely loved and adored Luc since the beginning, and was happy to see that he was able to get a little happiness.

Having now finished, I can’t wait for the next spin off, Eternal Rider, the first Lords of Deliverance book. I love that Ione was able to nicely wrap up everything with Eidolon, Shade, Wraith, Lore, and Sin and move onto a new series with a new story arc, and a new amazing sounding plot line. It will be nice to still be in the world of UGH, but moving onto something new and exciting.

All in all, I give Sin Undone an A.