Here are the books for October we think you MUST get your hands on!

Sunshine, Idaho, is a quiet ranching town, a perfect place to give injured animals a refuge…or to find one. And veterinarian Dell Connelly suspects there’s a reason his clinic’s uber-efficient receptionist has taken shelter here.

Jade Bennett couldn’t be happier to escape her well-meaning but smothering family and their expectations, not to mention the big-city jungle. There’s nothing like working with injured animals, having a forlorn, grumpy stray kitten make its home under her desk…or enjoying the gorgeous views of her ruggedly sexy boss

Jade is used to planning everything in her life, but Dell’s understanding has sparked an uncontrollable desire. And though Dell has never had time for love, Jade’s strength and sass is the kind of call no red-blooded male can resist…

As a tribute to her late journalist father, Tuesday Jones is planning a career benefit, auctioning off racing memorabilia and meet-and-greets with drivers. Ex-racing star Diesel Lange has had his own brush with death, and is determined not to waste another minute of his life- especially when he meets Tuesday. He wants nothing more than to shift their romance into high gear, but he knows she’s still grieving. Can Diesel do the one thing he could never do on the track and take it slow?

Recently, Vampire Queen Carling’s power has become erratic, forcing her followers to flee. Wyr sentinel Rune is drawn to the ailing Queen and decides to help find a cure for the serpent’s kiss-the vampyric disease that’s killing her. With their desire for each other escalating they will have to rely on each other if they have any hope of surviving the serpent’s kiss…

They soar through the night, unearthly creatures of legends and lore. Four masters of urban fantasy and paranormal romance explore the rapture of the heavens above, and the darkness below in four all-new stories of angels and guardians, and good and evil. 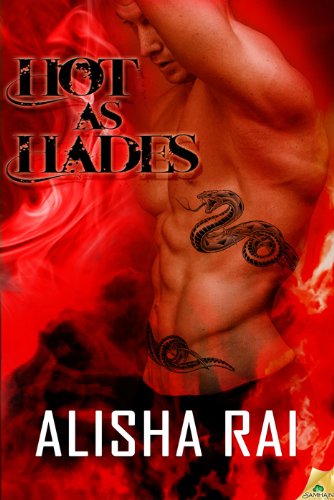 Ensnaring the ultimate bad boy has its risks…and its rewards.

It’s not easy being Hades. Constantly guarding his world against other meddling and ambitious deities is stressful work. So when a naked goddess falls directly into his lap, along with the news that he has to shelter her for the indefinite future, he is less than thrilled. Particularly since he can’t help but lust after the beautiful female.

The Underworld isn’t the first place Persephone would pick for a vacation—who in their right mind would choose a dark palace over sunshine and flowers? Yet from Hades’s first touch, the dark, sexy ruler fascinates her and has her thinking a fling might be just the thing to while away her confinement.

But trust each other? Not a chance. Until the day comes that Persephone must leave…and they realize that trusting each other is the only way they’ll ever meet again.

Me: The tall, sensuous, open-minded leader of my clan.

You: A deliciously curvy virgin who’s intimately familiar with what goes bump in the night. Must not be afraid of a little tail. Prefer a woman who’s open to exploring her animal nature. Interest in nighttime walks through the woods a plus.

My turn-ons include protecting you from the worst the supernatural world has to offer. Ready for an adventure? Give me a call.

Vampires and doppelgangers need not apply.

Emma Paulsen is a geneticist driven by science. But she’s also a psychic, so when a dark, good-hearted vampire frees her from the clutches of the evil Kurjans, she realizes he must be the man who’s been haunting her dreams. But with a virus threatening vampires’ mates, Emma may discover a whole new meaning of “lovesick”. . .

As King of the Realm, Dage Kayrs has learned to practice diplomacy. Still, it’s taken three hundred years to find his mate, so he’ll stop at nothing to protect her—even if it means turning his back on his own kind. . .

Down These Strange Streets Anthology by George R.R. Martin, etc.

All new strange cases of death and magic in the city by some of the biggest names in urban fantasy.

In this all-new collection of urban fantasy stories, editors George R.R. Martin and Gardner Dozois explore the places where mystery waits at the end of every alley and where the things that go bump in the night have something to fear…

Risa will go to any lengths to avenge her mother’s murder—even if it means making a pact with the most evil vampire she’s ever met. Lethal and powerful, Madeline Hunter is leader of the vampire council, and will put her resources behind finding the killer—for a price. The venerable vampire requires the assistance of Risa’s psychic powers. Quid pro quo.

Someone—or something—is targeting the elders of the local council, cursing the immortal vampires to rapidly age, sink into madness, and die. Risa must track down the vengeful being responsible. But Risa’s father, a rogue Aedh priest, also enlists her in a dangerous mission. And not even the great Madeline Hunter may be able to protect her from the shadowy forces that desire nothing less than Risa’s destruction.

They may enforce the rules, but when men in uniform are off duty and under the covers, they’re experts at breaking them. In this searingly sexy anthology, popular authors Maya Banks, Sylvia Day, and Karin Tabke present men in uniform-unzipped…

Claire O’Toole’s mother, Alana, went missing fifteen years ago. That was big news in Pineview, Montana, the kind of town where nothing much ever happens. Then, last year, Claire’s husband, David, died in a freak accident — after launching his own investigation into Alana’s disappearance.

Is Alana dead? Or did she simply abandon her husband and daughters? Claire’s determined to find out — and her former boyfriend, Isaac Morgan, wants to help. Although their relationship didn’t end well, he still has feelings for her. And yet it isn’t until he starts to suspect David’s death wasn’t an accident that he’s drawn back into her life.

Together, Claire and Isaac search for answers to the questions that have haunted Pineview all this time. But as they soon discover, someone’s prepared to kill so those answers won’t be found. . .

Enter the thrilling third volume in the epic Collegium Chronicles.

In Mercedes Lackey’s classic coming-of-age story, the orphan Magpie pursues his quest for his parent’s identity with burning urgency-while also discovering another hidden talent and being trained by the King’s Own Herald as an undercover agent for Valdemar. Shy Bardic Trainee Lena has to face her famous but uncaring father, one of Valdemar’s most renowned Bards. And Healing Trainee Bear must struggle against his disapproving parents, who are pressuring Bear to quit the Healers’ Collegium because he lacks the magical Healing Gift.

Each of the three friends must face his or her demons and find their true strength as they seek to become the full Heralds, Bards, and Healers of Valdemar.

The Legend of Beka Cooper gives Tamora Pierce’s fans exactly what they want—a smart and savvy heroine making a name for herself on the mean streets of Tortall’s Lower City—while offering plenty of appeal for new readers as well.

Beka and her friends will face their greatest and most important challenge ever when the young heir to the kingdom vanishes. They will be sent out of Corus on a trail that appears and disappears, following a twisting road throughout Tortall. It will be her greatest Hunt—if she can survive the very powerful people who do not want her to succeed in her goal.

The Kingdom of the Gods by N.K. Jemisin – October 27th

For two thousand years the Arameri family has ruled the world by enslaving the very gods that created mortalkind. Now the gods are free, and the Arameri’s ruthless grip is slipping. Yet they are all that stands between peace and world-spanning, unending war.

Shahar, last scion of the family, must choose her loyalties. She yearns to trust Sieh, the godling she loves. Yet her duty as Arameri heir is to uphold the family’s interests, even if that means using and destroying everyone she cares for.

As long-suppressed rage and terrible new magics consume the world, the Maelstrom — which even gods fear — is summoned forth. Shahar and Sieh: mortal and god, lovers and enemies. Can they stand together against the chaos that threatens the Kingdom of the Gods?

4 thoughts on “October Must Have’s”